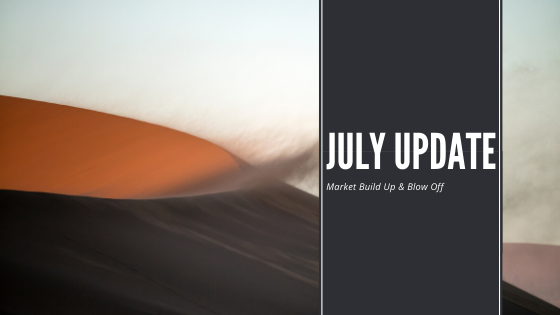 Market May Keep Building Up, Blowing Off ‘Froth’ for Some Time

July could be a pivotal month in the coronavirus crisis for many reasons. With the infection rate spiking in several states as June ended, we’ll find out whether these outbreaks can be contained without a major setback to reopening efforts nationwide. By mid-August, we should also see the release of corporate earnings reports, second quarter GDP numbers, and other data that will give us a clearer picture of the true economic impact of the crisis so far. How the financial markets respond to these developments will be telling—although I believe the shaky holding pattern the stock market has been in may continue for some time.

As you know, Wall Street has done a good job so far of staying laser-focused on good news while shrugging off bad news. As a result, the stock market was able to rebound from its initial drop of nearly 40% and has remained down by only about 10% for most of the pandemic. However, its hold on that relatively slight drop has been tenuous at times. That’s typical when a market is overvalued and experiencing a blow-off top rally, which is what I believe is happening. This is a period of irrational growth that occurs without the economic fundamentals to support it, and I believe in this case it also is occurring despite a lot of socio-economic uncertainty.

In truth, this market may already have been in a blow-off top period before the coronavirus hit. The pandemic has simply made the market’s top “frothier” and more vulnerable to getting blown-off, as was clearly demonstrated last month. When the labor department reported in early June that the unemployment rate decreased slightly in May rather than increased as most analysts predicted, the Dow Jones Industrial Average quickly shot up 800 points.1 Never mind that the real unemployment rate for the country still stands at close to 19%; just because the job news for May was slightly less bad than expected, Wall Street went crazy!

It went crazy again when the commerce department reported that retail sales rose by a record 18% in May.2 Never mind that sales had shrunk by a record 16.5% in April, or that second quarter GDP shrinkage is now expected to exceed 50%.3 Wall Street focused only on the good news, and the Dow added another 600 points.

Just as quickly as froth can build up during a blow-off top rally, it can be blown off. This happened only a week after the jobs report spike when Federal Reserve Chairman Jerome Powell said some things that were already obvious to most economists, namely that this recovery is likely to be slow, and that unemployment may still stand at between 8 and 10% by the end of the year. With that, the Dow dropped 1,800 points, its biggest drop since March.4

This rapid change also illustrates why a blow-off top period can be so volatile. Big money investors don’t really care whether a market spike is supported by economic fundamentals. Most are short-term traders and they just want in on the spike so they can make money. However—as I’ve noted many times—they also keep one finger on the trigger, ready to pull out whenever the next big selloff starts. That’s exactly what we saw in mid-June, and it’s probably what we will continue to see as reopening efforts proceed and more data emerges about the pandemic’s impact on every sector of the economy.

Ultimately, that dramatic 1,800-point blow-off in June could be a good thing because it brought a dose of healthy skepticism and caution back to the markets. There was little of that throughout April and May, and the lack of it may have put some everyday investors at risk of falling prey to the psychological trap of “FOMO”—or “fear of missing out”—and buying back into the market at a dangerous time. FOMO is always a danger during a blow-off top period, which is why it’s so important to keep things in perspective. Yes, the stock market has shown remarkable resilience during the coronavirus crisis so far, and there are some analysts who continue to believe the worst is already over for Wall Street. But considering all the potential setbacks to reopening, and the fact that we still don’t have a coronavirus vaccine, I’m not that optimistic—nor are most economists.

What’s more, even if a vaccine is discovered soon and virus spikes are quickly contained, the systemic damage already done to the economy may be more extensive than we realize. That’s why the next six weeks could be so pivotal, since second quarter earnings and GDP figures will help make that picture clearer. Either way, we may continue to see more weeks like we saw in mid-June, with froth building up and blowing off in an ongoing cycle. As a result, the market could continue to trade in a fairly narrow range. Where it goes when it breaks out of that range will depend on how the pandemic plays out in the coming months. If a lot of things go right (the outbreaks subside, we get a vaccine, etc.) it could go up. If just one thing goes wrong, however, it could go down significantly again.

The next downturn may not be as precipitous as the first, but I believe it is very likely to return the market to bear territory and possibly test its low point from March. The important thing for everyday investors to do during this period is to keep things in the right perspective, stay focused on asset protection, and be aware of the potential dangers of “FOMO” whenever the market’s blow-off top is building up froth again.