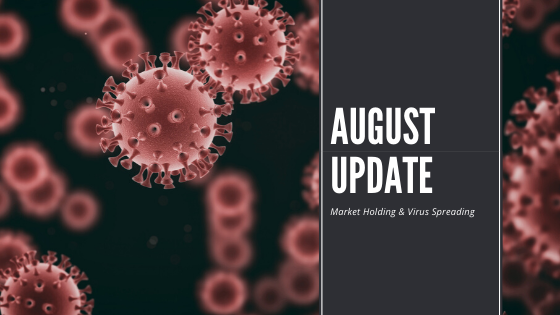 With Markets Holding but the Virus Still Spreading, What’s Next?

In last month’s newsletter, I noted that July could be a pivotal month for the coronavirus crisis and the economy, and it was. Two big questions were answered: will spiking Covid-19 cases slow the economic reopening, and can the financial markets remain stable despite that slowdown when faced with hard data about the pandemic’s second quarter impact? The answer to both questions was, yes.

In fact, the Dow Jones Industrial Average finished July about 900 points higher than it started the month, and barely registered a blip when the Commerce Department reported the US economy shrank by an annualized rate of 32.9% in the second quarter thanks to the pandemic. That is a record contraction, but about in line with what many economists had forecast. Personal spending, which makes up about two-thirds of GDP, fell 34.6%, also the most on record.1 Other major market indexes shrugged off the grim news, too, and the Nasdaq even hit a new all-time high on the first trading day of August.

Overall, it seems that big investors remain optimistic the economy can still make a strong recovery by year’s end despite its record shrinkage and spiking virus cases that have led to spiking unemployment numbers. They may be right, but I believe it could hinge on three factors all going positively in the next six months: the virus (we have no major resurgence over what we’ve already seen), the vaccine (we get one and it works), and more government relief (it gets approved and is sufficient). Let’s look at where each issue stands now.

In late July, the US hit a sobering Covid-19 milestone: over 150,000 reported deaths from the virus. What’s more, many analysts say the numbers may only get worse at an increased speed. Yahoo News reported the Centers for Disease Control expects up to 11,000 more American deaths per week in August, which would bring the death toll close to 200,000 by month’s end.2

The rising death toll is the result of a surge in new cases throughout the country, which started just weeks after states began reopening their economies and relaxing preventive measures such as mask mandates and social distancing rules. While some states have either paused or reversed their reopening efforts as a result of rising cases, others have resisted calls from health specialists to do so. Whether they will be able to continue resisting remains to be seen, but the answer may play a huge role in determining whether the economic recovery stays on track or comes completely off the rails.

While this situation is frustrating, it isn’t very surprising. Many analysts warned against reopening too quickly and predicted spikes would likely occur even under the best of circumstances. I’ve pointed out that unemployment numbers are likely to ebb and flow for the rest of the year as many reopened businesses are forced to close or scale back again in response to rising cases. Nevertheless, Wall Street appears hopeful, and it’s likely that much of their hope hinges on improving prospects for a vaccine.

Several coronavirus vaccines are moving quickly through the development pipeline. There is a good deal of optimism around several of them, including one from Moderna now in Phase 3 clinical trials, and another that Pfizer executives say could be available by the end the year. The Department of Health and Human Services’ “Operation Warp Speed” initiative has set an ambitious goal of delivering 300 million doses of a safe, effective vaccine by January.3

That’s all potentially good news, but analysts caution that no vaccine is a magic bullet. Its impact depends largely on how many people are willing to take it and, of course, on the effectiveness of the drug itself. Keep in mind, as I pointed out in a previous newsletter, last year’s flu vaccine was reportedly just 45% effective against the 2019-2020 seasonal flu.

All other issues aside, the stock market’s ability to rebound from its initial drop at the start of the pandemic has depended largely on the historic economic relief efforts undertaken by Congress and the Federal Reserve. While the Fed has said it has no immediate plans for more relief, Congress was working out the details of a new package as August began and enhanced unemployment benefits of $600-per-week expired for about 30 million Americans.

It’s uncertain how long partisan haggling will delay the new relief package, but it seems likely that something will be approved sooner rather than later. Some economists have pointed out that the lapse in enhanced unemployment benefits as negotiations drag on could generate a negative impact on consumer spending of about $12 billion per week.4

For the market to avoid another major pullback, all three of these factors must develop positively in the next six months. Beyond these key issues, there are many other factors that could impact the direction of the economy and the financial markets in the months ahead. Ultimately, the Age of Economic Uncertainty we had already been in before this crisis has been taken to a whole new level in the last four months. Many new risks have emerged, along with new opportunities. During this time, it is crucial for investors in or nearing retirement to measure these risks and opportunities carefully, and to continue making sure they try to protect their investments and retirement income!